Felix MARTIN - A Life in Motion

Felix was the second child of Benjamin and Rose NUNES MARTINEZ. He was born in Bethnal Green, London in 1892.

(Further reading: Rob ORLAND has put together an extensive website, categorising in detail many members of the MARTINEZ family.
He has particularly researched the family of Benjamin and Rose, and can be found on this site:
https://orlandfamily.historiccoventry.co.uk/martinez/martinez.php)

Being from a large family, perhaps there was pressure to leave the family home at an early age and find his own way in the world.
On the 2nd September 1907 he signed up as a boy sailor in the Royal Navy.  He signed on using the surname MARTIN and continued to
use this surname.  His height is given at five feet and a half inches and is described as having brown hair and brown eyes.

He joined H.M.S. ‘President’ a training ship moored on the River Thames London but was discharged on the 20th December 1908 as
'Unsuitable' but 'Good character'.  He gave his age on joining as 16 but his true age was 15– perhaps this and his small stature was the reason for him being discharged. 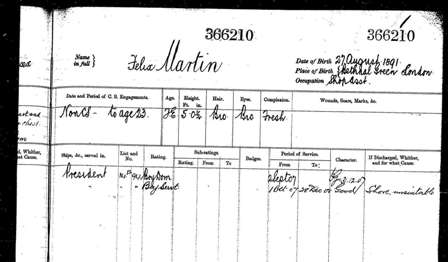 British News Paper research reveals that Felix and his brother Baron MARTIN attempted to join the Royal Navy at Portsmouth in August 1910. Having failed to get into the Navy,  they were both arrested and remanded after trying to enter a house on the Portsmouth Road, Woolston for the purpose of burglary. In pleading guilty the brothers said they were hard up, starving and wanted some money to buy a shirt to look tidy to join a ship at Southampton.  They were committed to trial at the next quarter sessions. Sentence is not known.
(Southern Echo 29th August 1910.  Hampshire Independent 3rd September 1910.)
By April 1911 Baron is shown as private in Army barracks in Hounslow, Isleworth, Middlesex.

With his parents living at 4 Victoria Road, Edmonton and he himself in lodgings, Felix had another brush with the law when he pleaded guilty at the Middlesex Sessions in March 1912 of embezzlement of his Baker master and of burglary in July 1911. In saying sorry for his actions he stated a reason for his predicament was: " - I would not have done it, only they would not have me home.". The Sentence was deferred to the next quarter sessions but the final outcome is not known. (Tottenham and Edmonton Independent Weekly Herald 23rd February, 15th March and 17th April 1912.)

Felix next travelled to Australia where he met and married his first wife Agnes HOWLETT on the 23rd September 1915.
Whilst Felix was of Jewish birth, their marriage was a Methodist one at the Parsonage in Clare, South Australia.
Their daughter Rose Agnes HOWLETT was born earlier the same year. . 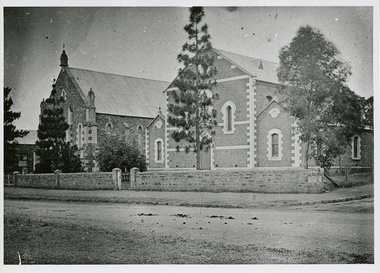 
Felix then enlisted in the Australian Imperial Forces on the 30 October 1915 with the correct age and birth date of 27th August 1892.
By this time he had grown a further two and a quarter inches and had a tattoo on his left forearm. He was given the Service no. B8887.

Felix left his wife and child by enlisting to serve abroad during W.W.1. and arranged for his Army pay to be transferred to Agnes. 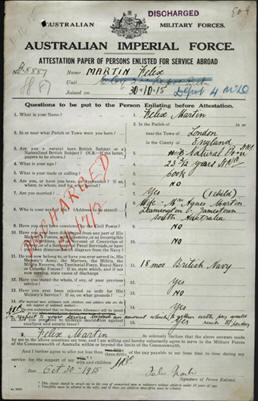 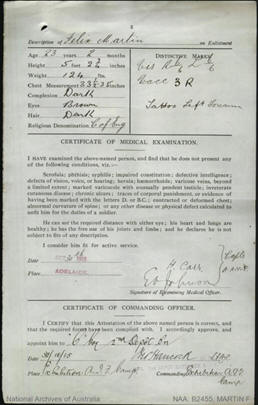 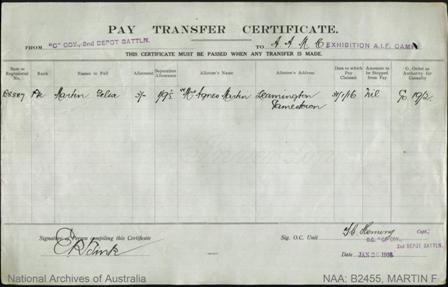 Again, this service was short lived as he was discharged medically unfit on the 16 March 1916 after hospital operations for a hernia.

Leaving his wife and child in Australia, Felix was soon back in England. How he got back is not known but a clue might be in his next
recorded journey.

He signed on as ‘Coal Trimmer’ on ‘RMS Celtic’ on 3rd September 1917 and left England, sailing from Liverpool and arriving in New York
USA on 14th September 1917. His age is given as 25, Race: English, Nationality: British, height: 5ft 2 inches and weighing 128 pounds (58 kilos). (Our Felix is not to be confused with another Felix Martin born in 1894 from the B.W.I. (British West Indies) who was a ‘Fireman’ crew member on ships sailing from Liverpool).   A ‘Trimmer’ on a coal-fired ship involves all coal handling tasks, starting with the loading of coal into the ship and ending with the delivery of the coal to the stoker or fireman. 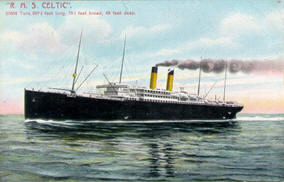 Maybe this unusual mode of travel getting to America in war time was the reason why he soon enlisted in the U.S. Army.

Felix marries for a second time in France.

Stéphanie MARTIN PETIT a Great Granddaughter has kindly provided a Marriage certificate of Felix MARTIN to Jeanne LOZACH indicating Felix was based in Brest (France) in a Caserne Fautras (a military building), and that he was a Naturalized American soldier in the U.S. Army and born in London on the 27th of August 1892, son of Benjamin MARTIN & Rose Saunders. 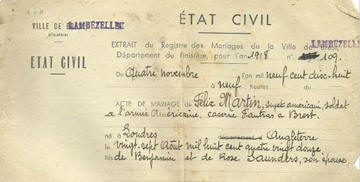 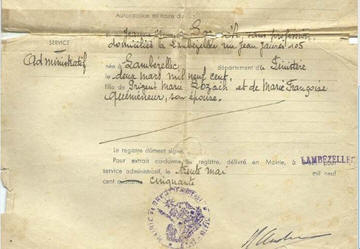 After the First World War had ended the American Government arranged for all their service men and families abroad to be repatriated back to the United States. 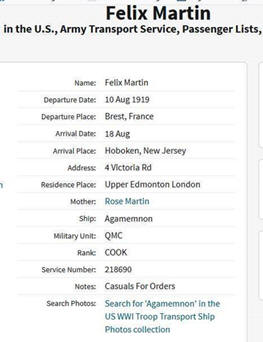 Felix’s wife Jeanne L MARTIN, described as a United States citizen, is shown sailing from Brest, France on the 10th August 1919 on ‘USS Agamemnon’ to New York arriving on 18th August 1919.  Husband Felix is shown as returning soldier on the same ship described on the U.S., Army Transport Service, Passenger Lists, 1910-1939 (Ancestry)  as on “Troop Ship” ‘Agamemnon’ from Brest, France to Hoboken, New Jersey with rank of Private/Cook giving address as 4 Victoria Road, Upper Edmonton and mother named as Rose.

In mid-December 1918, just over a month after the Armistice ended the fighting, ‘USS Agamemnon’ (formally the captured German ship ‘S.S. Kaiser Wilhelm II’) began to bring Americans home from France. She made nine voyages between then and August 1919, carrying nearly 42,000 service personnel, some four thousand more than she had transported overseas during wartime.
‘USS Agamemnon’ was decommissioned in late August and turned over to the War Department for further use as a U.S. Army Transport. 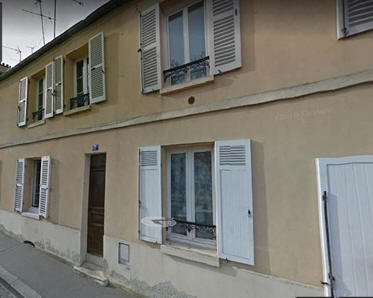 On 27th September 1923, Felix sailed alone from Cherbourg, France on ‘SS America’ to New York, giving wife as J L Martin with the same residence address in Versailles, France with occupation as Cook. He is described as a 'Alien' on arrival. Why he did not declare he was an American citizen (by way of his previous U.S. Army service) is unknown. 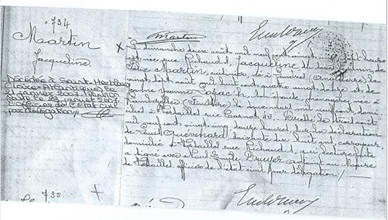 Translation of Jacqueline's birth certificate:
"On Sunday 2nd of August 1925 at 7.00am is born, rue Richaud in Versailles, Jacqueline, female, daughter of Felix Martin, cook, born in London (England) on August 27th 1892, and Jeanne Yvonne Lozac'h, his wife, housekeeper, born in Lambezellec  (Finistère), on the 2nd of March 1900, housed in Versailles, number 42 of rue Carnot. Done on the 3rd of august 1925 at noon, declared by Louis Quévenard, 78 years old, leather currier, housed in Versailles, rue Richaud and signed by Emile Druyer, civil official. - (on the left side of the certificate).  Died in Saint Herblain (Loire-Atlantique) on January 21st 2007."

This is a family recollection provided by Stéphanie MARTIN PETIT:

“My grand-mother Jacqueline always told my mother that she started her life in a comfortable family, riding horses, playing tennis, etc., but that one day, when she was around 6 years old, her parents had to abandon her because they were ruined.  She was told that her father had lost all of his money as he was a gambler. She said that her father was very kind and did not want to abandon her but seemed to have no choice. My grand-mother had a terrible childhood in different places and was very angry at her mother but not at her father.  Later in her life she tried to locate her father but never succeeded. Apparently Jeanne, her mother, committed suicide but I did not find anything on her death yet, not even the date”.

Family records show that they lived at some time in a flat in the Levallois Perret district of Paris.

It is not known where or when Jeanne died as she and Felix had separated and their daughter Jacqueline was being looked after by an aunt and uncle.

At some point in time Felix MARTIN returned to England and married for a third time.

Ada Adelaide JONES was born on the 18th August 1912 in Leytonstone, Essex.
On 21st July 1933 she married Felix at Marylebone Register Office, London. Address for both:  88 North Street (now Frampton Street), London NW8. Felix’s condition is given as ‘Bachelor’ with occupation given on the marriage certificate as Chef (Private) and father given as Benjamin MARTIN (deceased).

Ada adopted a boy given the name Ronald Hugh MARTIN born in 1935.

In the 1939 Register the family are shown living at 31 Park Grove Road, Waltham Forest, Leyton, Essex with birth date for Felix given as 27th August 1897? His occupation is given as Cook (Hotel).
Details are also given of their adopted Son Ronald MARTIN's birth date on the 1939 Register as 26th December 1935 but the transcription Image is blanked out.  Adopted son Ronald died aged 70 in Hillingdon, Middlesex in 2006.

The 1939 Register was an emergency type of census at the start of the Second World War to give citizens an Identity number which was later used as the basis for future U.K. National Health records.

With London suffering from heavy war time bombing, Felix now a Grill Room Chef set off with the family seeking a new life and safety in Bristol in the heart of the City’s nightlife.

It was not to be:

Felix MARTIN died in Bristol on 6th December 1941 of heart failure (Coronary Atheroma) at his home address of 5 Berkeley Square, Clifton with his age given as 44.  The cause of death states a Coroners’ certificate was issued following a Post Mortem.

The Incorrect age at death given as 44 instead of age 49 indicates that Felix took 5 years off of his age in later life but correctly stated his birthday on the 1939 Register as the 27th August. This birth date has been the key to distinguish him from another Felix MARTIN who died in 1929.

His wife Ada died there at the early age of 30 on the 25 February 1943 leaving care of adopted son Ronald to Bristol Child Services and a Aunt and a friend  living in London.

Though relatively a short life, and with early troubled times, Felix’s life appears to have been one well lived and in constant motion - full of marriages, service and travel. The historical documents listed help to build a picture of the man, Felix MARTIN, and these and the recollections of Stéphanie hint that this was a man that could not be still, or tied down and I am sure that there are many more stories that could be told.