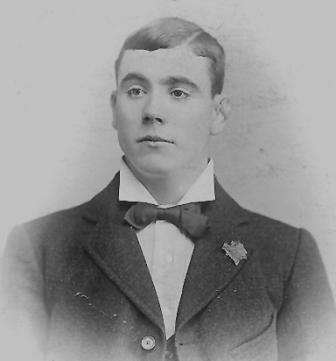 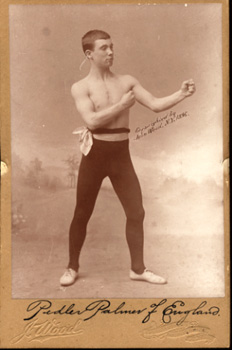 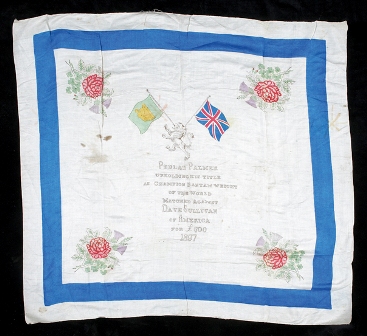 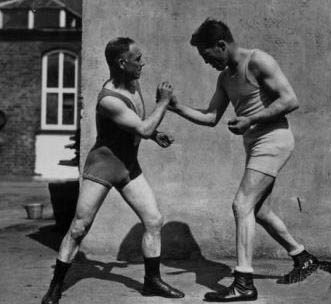 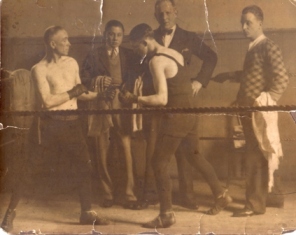 Sparring in Brighton 1932
(A Claridge)
Son Bobby back left 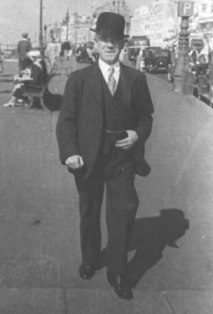 Strolling on Brighton seafront
(B Whipp)

Thomas Palmer was born in West Ham in London’s East End on September 21st 1876. When Thomas was sixteen his father, a bare knuckle fighter and champion of Essex, took him along to the “Blue Anchor” pub in Shoreditch. It was his intention to assess Thomas’ potential by giving him a workout at the gym there. It was arranged that Thomas would fight a local lad named Fred Johnson, a boxer who had beaten nearly everybody at the gym. Johnson outweighed Thomas and naturally, had greater experience. Thomas though, shook everyone by going the full three rounds giving a good account of himself by outsmarting the undisputed king of ring tricksters!

'Pedlar' gets his Nickname.

Buoyed by this, Thomas and his brother Matt took on all-comers in the fairground boxing booths and London Music Halls with choreographed boxing shows. Palmer was only 5 feet 3 inches tall. He started his professional career in the small halls up to 1893 when A.F. Bettison Co-founder and Managing Director of the National Sporting Club seeing the potential of the 'Box 0 Tricks' was soon to book 'Pedlar' for future fights at the Covent Garden venue. It was at this time that he earned his nickname 'Pedlar'. Perhaps it should have been 'Pedaller' because it was given in recognition of his ability to box whilst back-pedalling. Allied to speed and ring-craft 'Pedlar' became a formidable bantam-weight boxer.

On 1st May 1893, aged just 17, he took on Walter Croot at the National Sporting Club for the “100lb Championship of the World” and won with a Knock out in the 17th round after outclassing Croot. Four weeks later to the day he beat Mike Small in six rounds on points to retain that title. On the 15th October 1894 'Pedlar' beat Ernie Stanton over 20 rounds in a fight billed as the “British 7st 10lbs Bantamweight title”.
A year later he retained that title by beating Billy Plimmer with a disqualification in the 14th found.

'Pedlar' Palmer became Bantamweight Champion of the World on 12th October 1896 when he beat Johnny Murphy over 20 rounds at the National Sporting Club in London’s Covent Garden.  After successfully defending his World title against Ernie Stanton and the American Dave Sullivan in 1897 and Billy Plimmer in 1898 he went on to beat the American Billy Rotchford in April 1899.

Thomas 'Pedlar' Palmer married twice. His first wife was Margaret McKay whom he married in Holy Trinity Church, Plaistow on the 15th March 1896.
In the book 'Box o' Tricks' - The Pedlar Palmer Story - Jason McKay describes how the police had to clear the nearby streets of well wishers blocking the wedding carriage getting to the Church. Margaret and Thomas went on to have six children but the marriage ended unhappily in 1906 with a separation.

From his new found wealth Palmer opened a Tobacco shop in 213 Barking Road, Plaistow run by his brother Matt who had recently retired from boxing because of ill health. 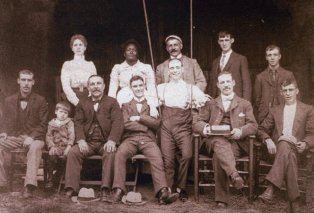 Tucked up in Tuckahoe.

'Pedlar' Palmer went to Tuckahoe, New York to defend his world title against Terry McGovern on 12th September 1899.  According to 'Pedlar' Palmer’s family history, what happened was that at the beginning of the fight, 'Pedlar' being an English sportsman, came to the centre of the ring to touch gloves. However, instead of doing the same sporting gesture, McGovern hit 'Pedlar' with a blow from which he never recovered.

The “Boxing News” of 1949 tells it that when 'Pedlar' entered the ring he was blinded by the fierce arc lights fitted for filming the event concentrated on his corner. McGovern didn’t enter the ring for another ten minutes, by which time Palmer’s eyes were strained and he could see nothing. So strong were the lights that when the referee called both fighters to the centre of the ring for final instructions Palmer still couldn’t see his opponent. When the bell sounded to start the contest, McGovern came straight out of his corner and landed a knockout punch with his first blow.

However, the “Times” and Jason McKay's book state the following:-

Both boxers weighed in successfully at the agreed weight of 8st. 12lbs on 11th September 1899, but the ever incessant rain on that day caused the contest to be postponed to the following day, 12th September 1899. McGovern refused any further weigh-in.

The fight had aroused quite a stir amongst the gambling fraternity and many a dollar was waged at this championship fight at Tuckahoe, State of New York.   The bell sounded the start of the contest. Both boxers met in the centre of the ring. There was an immediate protest from the time-keeper. He appealed to the referee and stated he had not rung the bell, but somebody had, and disappeared. Both contestants were ordered back to their corners to a fresh start. Confusion and chaos reigned at the time-keeper’s table and blows were struck at the time-keeper by a spectator.

'Pedlar' Palmer’s attention was drawn to the brawling at ringside when the bell sounded again. McGovern seized this opportunity, rushed across to Palmer’s corner and KO’d Palmer in 1 minute 15 seconds from the first bell.  The time-keeper claimed he had never rung the bell at all. The referee awarded the Championship to McGovern. There was no enquiry. The referee’s decision was final.

On 18th March 1901 'Pedlar' was beaten by Harry Harris over 15 rounds for the World bantamweight championship. However,'Pedlar'” did go on to win the South African Featherweight title in 1904.
On 29th May 1906 Palmer beat Cockney Cohen over four rounds in Plymouth in what was to be his last fight for five years.

'Pedlar' admitted in later life later that he took a bribe to lose the fight with Jim Williams for the English title on the 27th June 1902.

On April 24th 1907 Thomas 'Pedlar' Palmer was travelling home on a train from a race meeting when a large man named Robert Choat, got into the carriage and began foul-mouthing a group of women. 'Pedlar' detested the use of bad language in front of ladies and tried to quieten the man down. When his efforts failed 'Pedlar' threw a punch which landed on Choat’s neck.

Unfortunately for both men, the impact caused a blot clot to form in Choat's neck from which he never recovered. Palmer was originally charged with murder but was found guilty of manslaughter and sentenced to five years imprisonment.

'Pedlar' returned to the ring on 7th December 1911 when he was knocked out by Darkey Haley in the tenth round. Palmer fought six more times in 1912, and didn’t fight again until March 1919 when he hung up his gloves after losing to Jim Driscoll.

'Pedlar' Palmer fought 81 Contests (excluding exhibitions) and won 60 of them.

Thomas Palmer moved to Brighton in the late 1920’s where he had previously done most of pre fight training.

He married for the second time his long time partner Rebecca Pike (nee Hall) on the 8th March 1948 in Brighton Register Office. They had a son Robert 'Bobby' who was born in 1914. Rebecca was the wife of former Lightweight boxer William 'Bill' Pike an acquaintance of 'Pedlar'.

Some say 'Pedlar' lost interest in boxing and was rarely seen at contests. However, his great love now was horse racing and he was one of the familiar sights on Brighton race course or on Brighton Sea front visiting his friend Harry Preston owner of the 'Royal Albion' Hotel where he was “at his breeziest and in best humour”.

'Pedlar' Palmer, one of the greatest bantamweight boxers Great Britain has produced, died of pneumonia in Brighton on the 13th February 1949 at the age of 72 years. He is buried in the Brighton & Preston cemetery.

In 1993 a mystery opened when a gold belt was found hidden away in a Brighton bank vault after 80 years. It had been commissioned by the National Sporting Club and given to 'Pedlar' by his fans in 1897 in recognition of his achievements as the best bantamweight of his era. It was believed to be studded with diamonds and rubies but on valuation they were found to be made of glass and paste.

How this mystery came about and all the fight details are examined by Jason McKay in his highly researched 2009 book on the life of 'Pedlar' Palmer.

Sadly, ownership of the belt couldn’t be established and even 'Pedlar’s' son Bobby tried unsuccessfully leaving the mystery unsolved. The belt is now held at the British Boxing Board of Control’s office in Cardiff.

I am indebted to Jason McKay and John Harris for their help in collating this article. - Brian Whipp 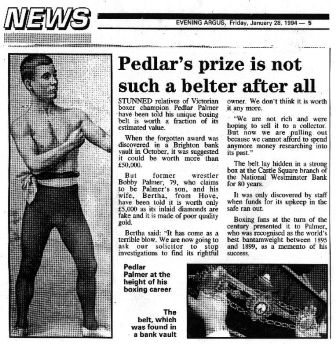